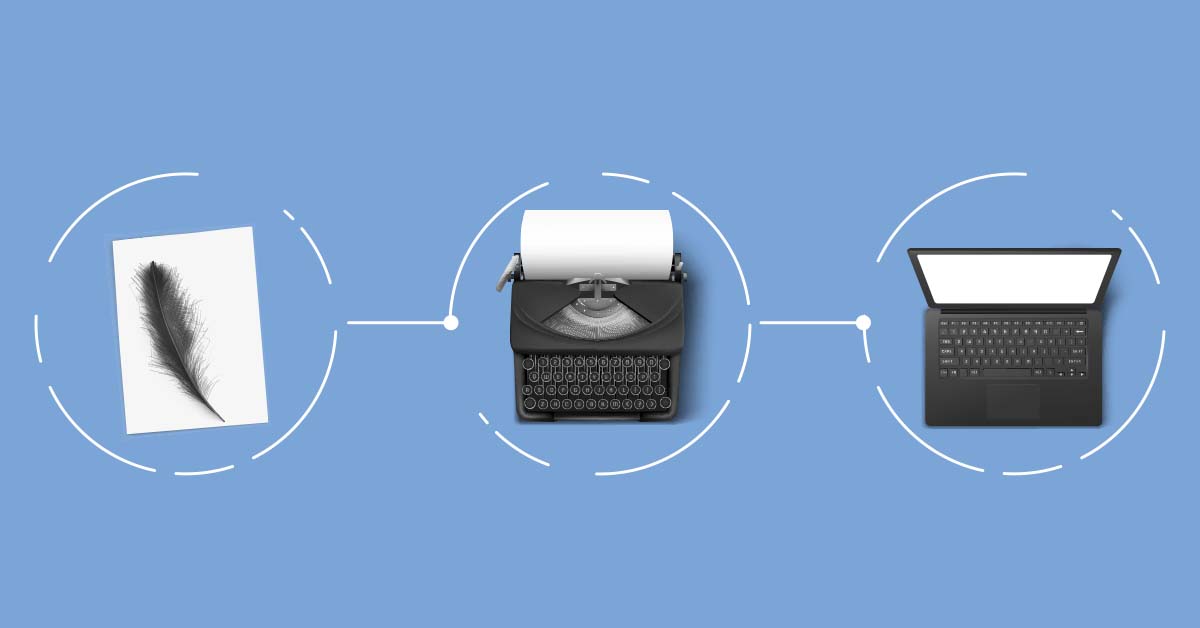 For most of history, paperwork was done – either with charcoal, a quill pen or, later, with a fountain pen. People with the ability to read and write were able to secure rewarding jobs.

In ancient Egypt, one of the most important professionals was a person educated in the arts of writing. Scribes, professional copyists responsible for making copies of manuscripts, were a cornerstone of Empires: they wrote laws and kept business and historical records in place. They also paved the way for creating other professional roles, such as journalists, accountants, and bookkeepers. What we now perceive as a basic skill was enough to make a living for centuries.

Until 1868, when four Americans patented the typewriter – the first grand revolution of manual office work. In 1888, less than a decade after the typewriter became a standard in successful offices. One could read the beautiful compliments the new machine was getting in an eight-page article on The North American Review.

It is to the pen what the sewing machine is to the needle […] Less than a decade ago, people had to be argued into acknowledging its practical usefulness, and more than one hard-headed businessman was found who ‘had no time to fool away upon a writing machine’. Today the same hard-headed businessman is very sure that he has no time to fool away upon a pen.

Henceforth, people who could read and write had to learn a new craft: to use the new machine that helped one operator “accomplish more correspondence in a day than a half dozen clerks can with the pen, and do better work”. As a result, overall organization and productivity grew tremendously.

Typewriters kept evolving, with IBM entering the market in 1935 with the IBM Model 1, and were the go-to machine for the everyday office worker until the 1980s.

In the decade of the neon colors, spandex, and high wasted jeans, the personal computers transformed offices again. For the first time in human history, one could copy and paste text and save documents. This was the beginning of a massive technological shift.

The bulky IBM 5150 running Microsoft’s MS-DOS operating system, launched in 1981, was the first PC to gain widespread adoption. People had to learn how to operate the new tool that seemed straight out of a science fiction novel. So much so that “computerphobia” came up in several newspapers, magazines, and psychology studies in the late 1980s.

Before going any further, let us do a brief stop. Looking back, 100 years ago, workers moved from a pen to a typewriter. Then, from the typewriter to the personal computer. In nearly a century, people only had to learn two major skills: typewriting and to use the PC – starting it, copying and pasting text, saving documents, and using software such as MS Word and Lotus 1-2-3.

In the 1990s, the invention of the Internet changed the nature of office working once again. Email became the go-to communication tool in offices (making the telegraph and the telex network obsolete for business purposes), and information started flowing on the web. As a result, people began using the Internet mainly for business purposes, such as email, e-commerce, and online forums and blogs.

From this time forward, the computer took the stage, and, for the first time, the main inventions that shifted the way offices worked were “inside” the hardware. As opposed to what office workers experienced 100 years prior, the need to refresh the workforce’s skillset became incessant. As software took over how businesses operated, businesses became software with many moving parts that users had to learn how to run.

Fast-forwarding to today, digital is conquering all fronts of organizations, and software must keep up with all the persistent business changes. However, organizations face an unprecedented challenge: there are few talented human resources to make this happen. At least, not in the current way of developing software since most workers do not have the programming skillset of a Computer Sciences graduate.

Yet the market seems to tell us otherwise. According to Gartner, 80% of technology products and services will be built by people outside IT in just two years. In turn, that is only possible due to tools that democratize software development, such as the ones using the modeling/low-code paradigm, and are assisted by artificial intelligence. Business people can use these without any prior experience in IT.

Empowering office workers to develop their software is the upcoming grand revolution in the workforce. It will foster a culture of intrapreneurs that digitalize the operation and create new opportunities for their companies by translating their industry know-how into marketable software.

For a member of the workforce and a business, adapting to changes and overcoming challenges has never been so important. As Charles Darwin puts it in his “Origins of Species”, it is not the strongest species that survives, nor the most intelligent that stays. But, it is the one that is most adaptable to change.

The most skilled workers went from knowing how to read and write manually to using a typewriter. Then the skills of operating a keyboard were upgraded to using a computer. Office workers then learned how to use the software in all of its forms. As organizations shift to becoming software disguised as businesses/public services, they need their workforces to create software. This is the next grand revolution of the 2020s.

WE CAN HELP YOU AND YOUR ORGANIZATION UPSKILL YOUR WORKERS AND FOSTER INNOVATION. CONTACT US.

Quidgest is a global technology company, a pioneer in automatic software modeling and generation. Through the extreme low-code platform Genio presents a vast portfolio of solutions, in different areas, aimed at continuous improvement in the management of companies and public institutions of excellence.