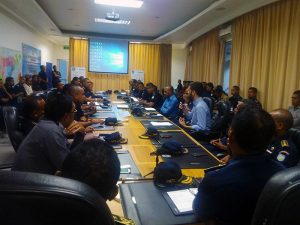 Also present were the 2nd General Commander, the Administration Commander, the Head of the Human Resources Department, and the commanders or representatives of all PNTL Municipal Commands and Units.

The project was considered a success by PNTL and the system, in full use, is now managing  four thousand police elements. The implementation, which lasted a year, was led by Joaquim Soares and guided by Marcelina da Costa, Information Systems Development Director at Quidgest East Timor.